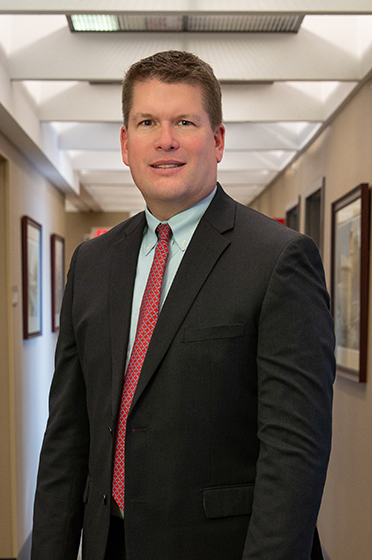 VINCENT G. ROBERTSON joined Parkowski, Guerke & Swayze, P.A. in January of 2017 as a Director, as part of Griffin & Robertson’s merger into the firm. His areas of practice are primarily concentrated in governmental and administrative matters, zoning, commercial and residential real estate, liquor licenses, and land use litigation.

Mr. Robertson is a member of the Delaware and Sussex County Bar Associations (where he previously served as Secretary), and is also admitted to practice before the U.S. District for the District of Delaware. He is currently a board member of the Cape Henlopen Education Foundation. Past organizations he has served with include the Delaware Board of Bar Examiners, the Council of the Delaware Association of Professional Engineers, Sussex County Habitat for Humanity and as past President of the Cape Henlopen Boys Varsity Basketball Boosters.

Mr. Robertson represents Sussex County, where he has served as Assistant County Attorney since 2003. Although he is involved in nearly all types of legal matters affecting Sussex County, his primary areas of responsibility include the Planning and Zoning Commission and the Engineering Department. Other clients include the SoDel Restaurant Group (Owners of Bluecoast, Fish On, Papa Grande’s and others), Lankford Properties (including the Atlantic Sands Hotel), Del-One Federal Credit Union, Seaside Amusements (owner of Funland), Fins Hospitality Group, Arena’s Restaurants and many other large and small clients.

Prior to joining Parkowski, Guerke & Swayze, Mr. Robertson practiced with Griffin & Robertson (formerly Griffin & Hackett) since 1994, becoming a partner there in 2003. He graduated from The University of Delaware in 1991 with a Bachelor of Arts Degree. He next attended the University of Louisville School of Law, receiving his J.D. in May of 1994. While attending the University of Louisville, he was a member of the Law Review. He was admitted to practice law in Delaware in 1994. He lives in Lewes and Rehoboth with his wife and two sons.